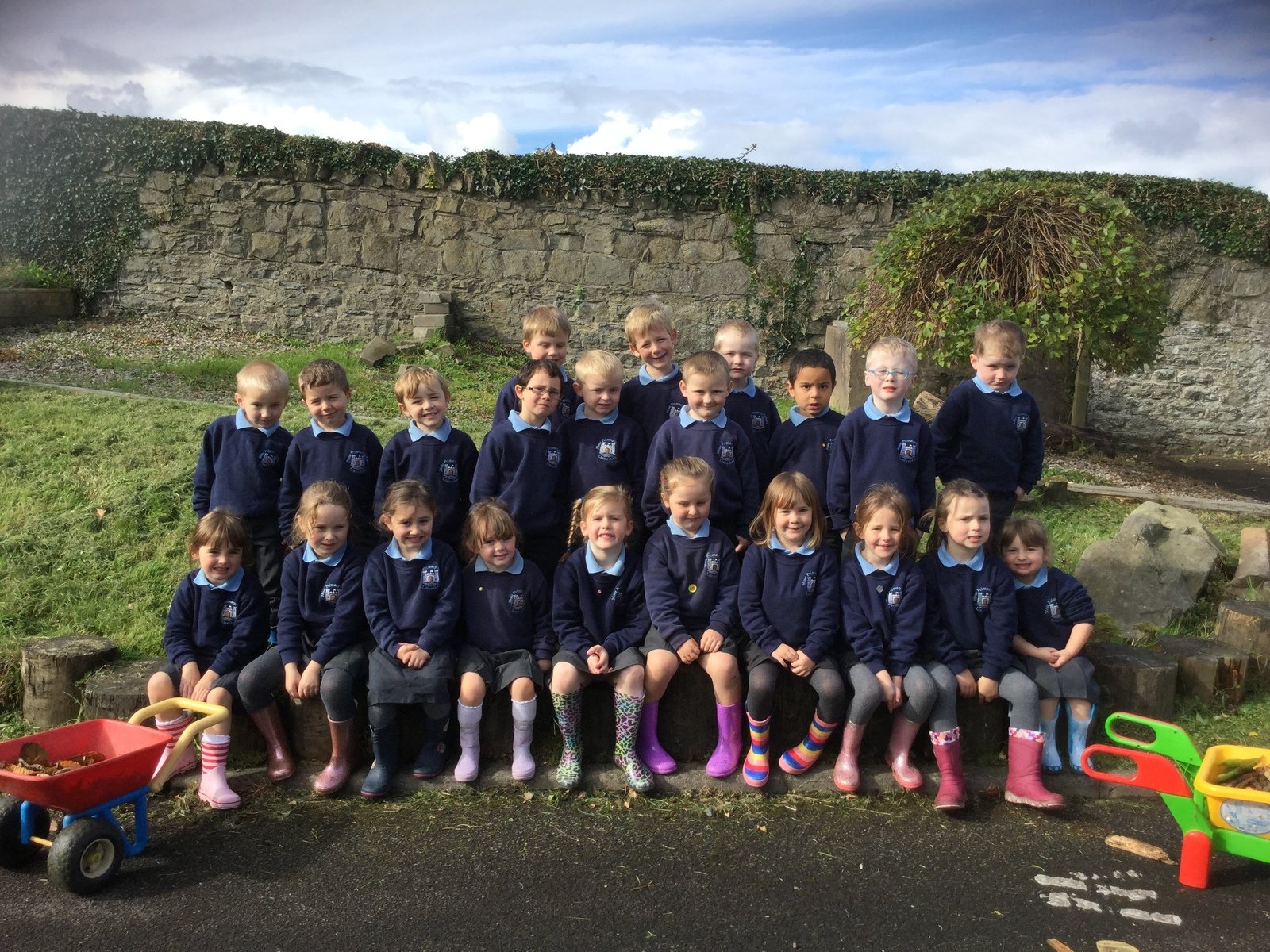 History of the School

A Short History of the Moat Primary School, Lisnaskea

In May 1824, the Moat School was founded at Cornashee, Lisnaskea. It was close to the Moate Ring, an old fort at Cornsahee. This was a pre-Christian burial place and later marked the spot where the Maguires (the Kings of Fermanagh) were crowned.

The school house was built at a cost of £500. John, Earl of Erne (the present Lord Erne’s great grandfather) was a trustee. The school was a two-storey house with two rooms - one for the boys on the ground floor and one for the girls on the upper floor. There were desks to seat 60 children in each room. The headmaster’s family lived in the same house.

The first headmaster was Thomas Scholes. He taught the boys, while his wife Eliza, taught the girls. There were 200 children on the roll when the school first opened.

During the famine in Ireland (1845-47), when the potato crop failed, the numbers dwindled. During this time, Lord Erne brought food to the starving. There was then a fever epidemic and many more died.

In 1856 a new headmaster, Mr John Morrison, was appointed to the school. He was the great grandfather of Mr George Morrison and Mr David Morrison of Manorwaterhouse, Lisnaskea. His daughter, Elizabeth, was his assistant. He taught until 1875 and then went to live in Manorwaterhouse and farmed there.

In 1898 Mr John Benson was appointed principal of the Moat School. As the town began to develop, more people were attracted to live here. The Governors of the Moat decided that they should look for a new site closer to the town. The then Lord Erne allowed them to choose a piece of his land. They chose the piece of land lying between the Church and the workhouse where the school is today. This was a magnificent gift to the people of Lisnaskea. He also gave the school £100 and provided the stone for the building from an adjacent quarry. Later Lord Erne gave a site for the school residence where the headmaster could live. The school was built for £600 and the headmaster’s residence for £250. Various fund raising activities took place and the sum of money was raised.

The present school was to be opened by the Bishop of Clogher on 21st January 1901. However on this date, news of the illness of Queen Victoria was heard and the opening was postponed.  The new school was then officially opened on 25th March 1901.  The old Moat School building was sold to the Woods family, then passed to the Patterson’s (Mrs Patterson’s family) and then the Wilson family. It is now owned by Mr Norman Hutchinson, the adjoining school field still belonging to the Patterson family.

Mr Benson, the principal, retired in 1919. He was succeeded by Mr Thomas Cooke. By now the curriculum included singing, cookery and drill. Miss A. Law, one of the teachers, was a singer and played the school piano. Miss A. Holmes joined Mr Cooke and Miss Law as a teacher. Mr Cooke died in 1931 and Mr Robert Gillespie was appointed to the school as principal. He served as principal for 38 years.

Originally the school was one long room, divided by a curtain. Later the curtain was replaced by a wall and a third room was added. This third room is still incorporated in our present building as the P4 classroom. Boys had woodwork and the girls learned needlework and cookery.  Children attended school from 6 years to 14 plus. School became compulsory after 1942.

In 1948 Mrs Sadie Gillespie (wife of the headmaster) and Mrs M Graham were appointed to the teaching staff. The 11 plus was introduced in 1947. At this stage, the school changed its name to Moat County Primary School. The classes were numbered P1-P7 and children now left before their 12th birthday.

The school continued to grow and had to use the Wesley Hall for a period to accommodate the numbers. Mr Ronnie Kemp joined the staff of the school for a short time and taught in the Wesley Hall. In 1955 it was decided to remodel the school. During the building period, the school relocated to the Wesley Hall and the Recreation Hall (now the site of the telephone Exchange). The teachers were Mr and Mrs Gillespie, Mrs Graham and Mrs Hogg (mother of Mr Edgar Hogg, Maguiresbridge).

On 21st September 1956 the new school was opened by the Minister of Education for Northern Ireland, Mr H C Midgley. There was reportedly great excitement when his sleek black chauffeur driven car drove up the school avenue. To mark this occasion, Mr Birnett (Art Advisor in Co Fermanagh) designed a school crest. This is still on display and can be seen as you climb the stairs to the ICT suite or P7 today.

In 1950 Mr Gillespie (principal) received a MBE. He was also awarded the Carlisle and Blake Memorial Premium. This was the highest distinction that could be awarded to a primary principal by the Minister of Education.

The school was soon found to be still not large enough to accommodate the pupils and the first mobile classroom arrived. This was followed by three more!

In 1965 Ballindarragh Primary School closed and the children joined the Moat School. In 1966 Mrs Doris Campbell and Miss Mildred Moore joined the staff. Mrs Elizabeth Kettyle joined in 1967 and Mrs Margaret Robinson in 1968. Mrs Margaret Jackson (wife of Rev R S Jackson) was appointed in 1969 and Mrs Woods in 1971.

In August 1969, Mr Robert Gillespie retired and his wife, Mrs Sadie Gillespie, was appointed principal. Sadly Mr Gillespie did not live long to enjoy his retirement as he died in February 1970.

Work commenced in November 1977 to replace the four mobile classrooms. The old and new school were blended together. The Moat now had seven large classrooms, a dining hall/gym, a kitchen, a staff room and an office. There was also a quiet room, craft room and stores. The extension was opened on Thursday 21st June 1979 by the Earl of Erne. Mrs Gillespie continued as principal until her retirement in 1980.

Tiraffy school (near Sallaghy) which opened in June 1924 closed in 1979 and the pupils transferred to the Moat. Mr Latimer took up the position as principal in 1980, having previously taught in Gloucester House, Portora. Mr Wilson, Mrs Patterson, Mrs Rene Johnston, Miss Bownes and Miss Bell took up teaching appointments during his leadership. Mrs Patterson, who joined the staff in 1991, was appointed vice-principal in 1999 and continues to hold this role. Mrs Neely joined the staff in 2000.

Mrs Valerie Clendenning took over as principal in 2001 and was principal at the time of the school’s centenary in 2001.  This was a wonderful celebration of the school after 100 years on its present site.The Earl of Erne Primary School closed and the pupils from Derrylin and Teemore joined the school. Mrs Debbie Gervais (nee Johnston), MrsLinda Gould and Mrs Wendy Black were appointed to the staff of the school under her leadership.

In December 2006 Mrs Clendenning retired and the present principal, Mrs Felicity Humphreys, took on the role on 1st January 2007. Mrs Humphreys was a former pupil of the school and remembers the school before the 1979 extension quite clearly. She remembers the four mobile classrooms. She recalls not being allowed to put a foot on the grass! She remembers gathering around the television for factual school programmes, taking notes on the programme and then writing up an account afterwards . She recalls trips to the cinema at the bottom of the school lane (Yes- a cinema in Lisnaskea!) to watch Road Safety Films!

Today the school remains an important establishment in the town of Lisnaskea, ensuring that it continues to provide an ‘outstanding’ education for its pupils today and tomorrow!